I invite you to listen – Music Thinking in Service Design

This year the Design Thinking Conference in Amsterdam was held for the first time. With the theme of the conference – EMPATHY – THROUGH DIFFERENT EYES the organizers were aiming ‘to shake you up and enrich you with new insights, not just leave you comfortable and confirmed in your beliefs. No briefing to the converted, but experimenting, experiencing, having fun and being surprised.’

In this regard I was doing one of the breakout sessions with the title:

I invite you to listen

“How can you have empathy with someone you don’t like or don’t understand. That is maybe the most difficult way of having empathy. One way to do this is to close your eyes and listen deeply to what they say. I invite you to listen, to a stranger, to the concept of music thinking and to everything that is around you.”

The Music in You
We started with a short exercise I call: ‘the music in you‘, this is to get to know each other, but also to see if we have a diverse group or not. So with sharing our favourite music and our least favourite music, we gave the stage to every participant to share one by one why they love the music they love.  The other participants were deep listening and empathising with that person, the music or both.  I have done this in many sessions and it is a great way to share things others may not know or like.

John Cage 4’33”
The next part was the introduction of the composer John Cage and his famous piece 4’33’’ from 1952; 4 minutes and 33 seconds of tacit (not playing) in three movements. I explained his quest for the total silence and the disappointment that there is not such a thing. We then did a rehearsal and experienced the piece from a performers point of view.

I invite you to listen II

Performing John Cage 4’33”
After the lunch break we performed Cage 4’33’’ in front of the complete conference audience of approximately 100 people without telling them what Cage 4’33’’ is all about. What happend the more than 100 attendants of the conference were listening for 4 minutes and 33 seconds to a tacit performed by the Music Thinking Workshop Band. What they heard was not silence, they heard a musical piece, that was composed through their ability to listen what is in the presence.
Please click on the picture below to hear the recording of this memorable moment. 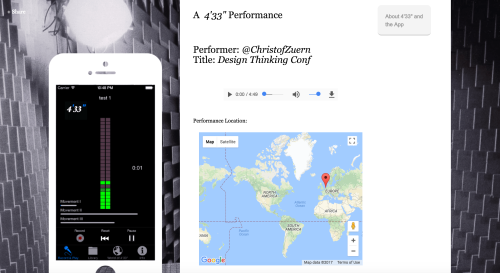 I conducted the piece like written in the score and giving a cue for every movement. What happened is that some of the people misread my last cue and thought the piece was over and started clapping, a nice moment and beautiful sound appeared that quickly faded away and gave the piece an extra tension.

There was no announcement before or after the piece explaining what we did or what the context is. So 4’33” was treated like a ‘normal’ musical piece. Like if you had a short musical intermission by, lets say a small piece from Bach, or a singer songwriter piece, you also would not explain what the piece exactly is about, you were just listening and enjoying.

I recorded the piece with my iPad and uploaded it directly on the John Cage platform. Here is the audio recording and a picture of participants including philosopher André Klukhuhn, who joined us in the workshop (he told me he once also conducted the piece ). We talked about the link between 4’33’ and what he called the ‘god shaped hole’. 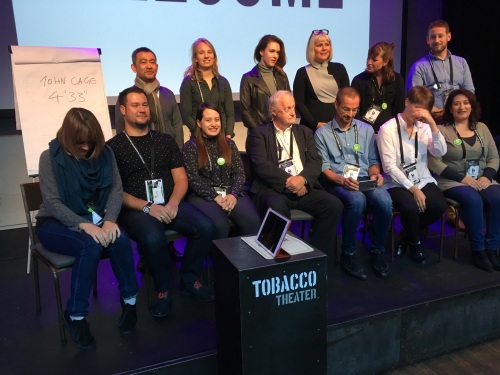 Right before the performance

thanks to all the participant & the performers of the ‘Music Thinking Workshop band’ you made this a memorable moment!

Note: The next Design Thinking Conference will be held in Amsterdam on 11th and 12th of October 2018