Connecting the dots in many colors – Epiphany 2017

As my friends know I am not sending christmas cards or new years wishes. The last weeks I heard more often ‘looking forward to your epiphany wishes’ –  my tradition to do a mailing on the 6th of January raises some expectations. 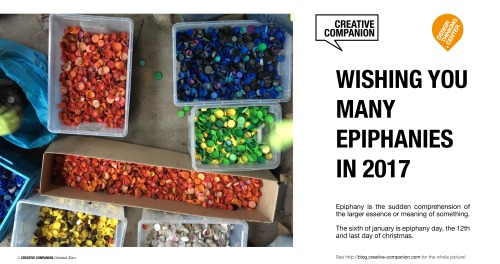 Today is Epiphany day – the 12th and last day of Christmas. For me it is also the day of changing perspective – a magic pivot. The holiday season is over and we can focus on the coming year.  A good moment to wish you many Epiphanies in 2017!
Epiphany is not only the last day of christmas, but also stands for an experience of sudden and striking realization. The word epiphany originally referred to insight through the divine.
Today, this concept is used much more often also without such connotations, but a popular implication remains that the epiphany is supernatural, as the discovery seems to come suddenly from the outside. More on this see below (‘A collection of different meanings of Epiphany’).

Connecting the dots in many colors

The last year was colorful in many ways and there were some moments where things were changing very quickly because ‘the last piece of the puzzle’ revealed the whole picture. On the epiphany card this year I am using two logos: CREATIVE COMPANION  and Design Thinking Center.
When beginning of the year a friend sent me an email with a link to a job and the remark ‘I think this is something for you’, I did not realize what impact this could have one year later. I started as Chief Design Officer at the Design Thinking Center, but also kept working as CREATIVE COMPANION for clients like the dutch judiciary, nationale nederlanden, coca cola hellenic, council of dubai, ING (in cooperation with the Design Thinkers Academy) and others .

The picture above is taken on a cloudy cold december day where a group of about 20 people from our sustainability partner Plastic Whale and the We Accelerate People Group came together to sort more than 20.000 PET bottles collected by Plastic Whale in the last month. The caps of the bottles had to be removed and collected (imagine the sickening smell), the rest of the bottles sorted and packet for recycling into plastic material that were used to build a boat for the Design Thinking Center.
So this picture is symbol for connecting all the dots of sustainability, Design Thinking and  Creative Companionship.

So nothing will change, but all the dots are connected ;- )

have a great year
Christof Zürn

A collection of different meanings of Epiphany:

This entry was posted in Epiphany, Inspiration and tagged Epiphany, epiphany day. Bookmark the permalink.

One response to “Connecting the dots in many colors – Epiphany 2017”